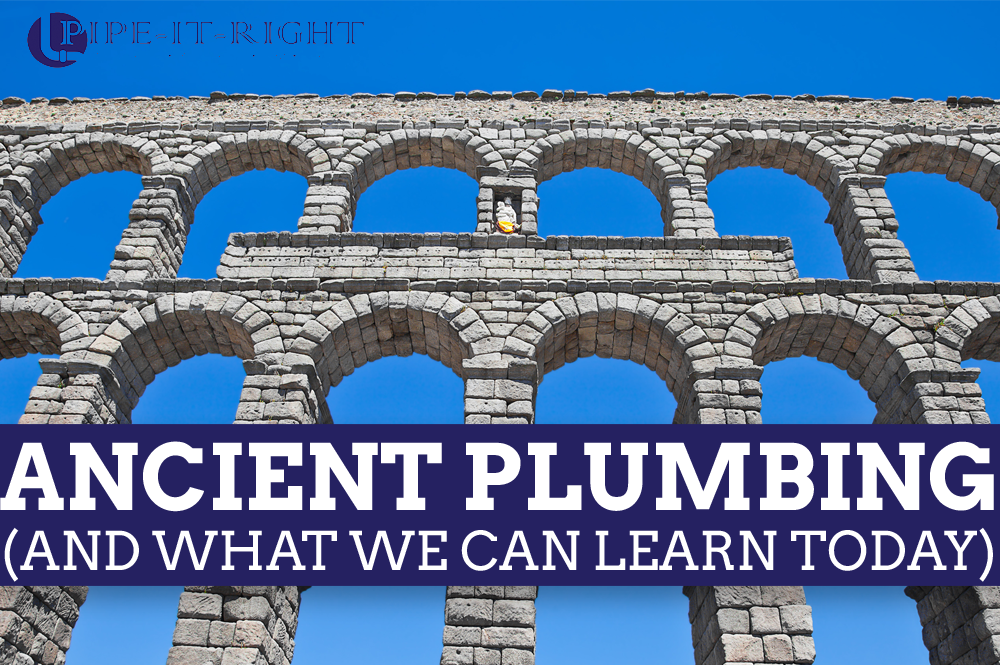 Posted at 12:45h in Plumbing by Pipe It Right 0 Comments
0 Likes

Overview: Learn how ancient plumbing systems evolved throughout history, and what changes we can see today.

Visiting the bathroom is a part of our daily routine, but we don’t give it much thought. From brushing your teeth to washing your hands and taking a shower in the morning, it’s almost second nature. During those moments, unless you’re naturally inquisitive or feeling bored, you won’t think much about how the toilet works – but would our lives be the same without it? Absolutely not!

With a long history of advancements and inventions, plumbing has come a long way. Motivated by their basic needs and the root cause of sicknesses, humans created sewage systems fairly early in world history. The credit for this genius effort goes directly to the ancient Egyptians, who introduced pipes to baths and waste removal systems. Let’s look into the history of plumbing and how it has gotten where it is today!

Going back, we find that the earliest pipes were made of clay and straw. The first copper pipes were made by Egyptians (the aforementioned plumbing geniuses). They dug as deep as 300 feet to install their pipes, which we know because remnants of these pipes were found in the pyramids they built as tombs for the dead.

The Greeks were not far behind with their innovations. They were able to engineer cold and hot running water for showers, which must have been very useful for their athletes after the original Olympics!

Hot Water in the Pre-Modern Age:

The Romans heated their water with wood furnaces. In their public bathrooms (or “latrines”), there would be 20 seats arranged in a single room with water running beneath them. People would chat with each other while “doing their business,” and their waste would be carried to the nearest sewer. As cities grew, the proximity of the waste led to diseases and outbreaks, affecting everyone’s health.

After the fall of the Roman and Greek empires, plumbing technology reached a standstill – until many decades later.

With John Harrington gifting the first flushable toilet to Queen Elizabeth I, plumbing emerged from its humble beginnings. Unlike today’s running water sounds, the noise produced by a flush toilet used to be deafening. With technological advances, these noises started lessening, and now we barely notice the sound of a flushing toilet.

And then the rest is history!

Plumbing technology has improved throughout history, with centuries of innovations making our lives easier. Today, eco-friendly products continue to make our bathrooms more “green.” From clay pipes to high-tech smart pipes, from wood furnaces to modern tankless water heaters, and squeaky sounds to smooth-flushing toilets decked out with LED lights, we’ve definitely seen a lot of evolvution in plumbing.

We don’t think twice about our modern plumbing, unless it stops working and we feel like we’ve been dragged back to the old times. Although technological development has made life a lot easier for everyone, leakages and other emergency plumbing issues sometimes arise, leaving the homeowner scrambling for a fix!

So if you’re experiencing toilet trouble, make sure you reach out to Pipe It Right!

Sorry, the comment form is closed at this time.